How “not” to drive in Thailand and survive!

But most people are not like me, and have even driven confidently since before they were 18, I know some people who were driving on highways at 14. I’m not one of them. But if you are a “normal” person and you travel, rent cars or motorbikes in the places you visit, then you will definitely benefit from:

The Traveler´s Guide to Driving Etiquette.

I did not drive in Bangkok or in Phuket. My husband did, and I went in the back with the kiddos. I still do! No one will let me go in the front because they are all so used to having me there squished between the carseats.

When we arrived in Thailand I was already used to being driven around while sitting in the back. Im a backseat rider, a taxi getter, a chauffer spoilt traveler. I have never been the “I´ll drive!” excited teenager or the “Shotgun” squealing companion. I´m the one that sits behind the driver, reading a book, looking at the phone if it has 3G, holding the baby´s hand, nursing if acrobatically possible with a carseat, doing my nails, or doodling car moving doodles. 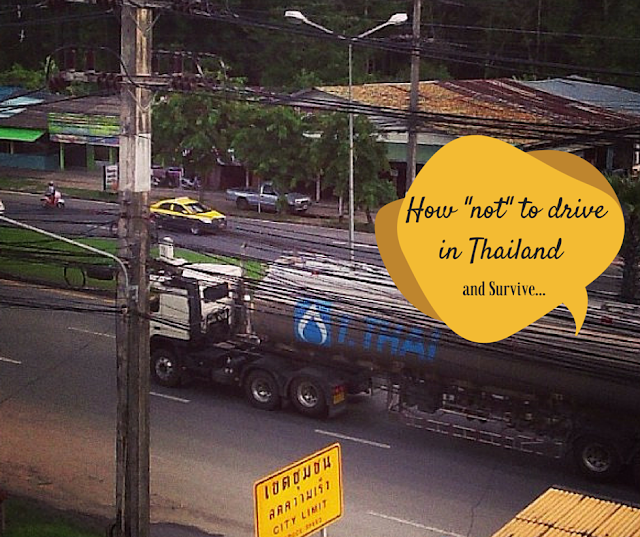 Why did I never get a license you say? Well, I never needed one. Until we got to Phuket. And then everyday I grumbled at the fact that I had never got a license. But by then it was too late. You can´t get a Thai license as a tourist so that was that. But why did I feel this way? Because in Phuket there is no reliable public transport, no easy to take taxis, no trains, no subways, no river taxis. Wait, did you say “river taxis”? Yes, during the 10 months we spent in Bangkok not once did I feel like I need to drive, not once. In fact I couldn´t believe that there were people who had cars in Bangkok when they could take public transport, one of those being river taxis!

Thankfully my husband was pressured into getting a driver´s license while we were in Peru. He worked for a company that needed him to be able to drive one of the vans, so he had to get a license. It took him a couple of tries but he got it eventually. If he had not gotten that drivers license in Buenos Aires (he got it in Argentina because foreigners in Peru cannot get Peruvian licenses either), we would have been in big trouble.  If you don´t have a car or motorbike in Phuket you are literally stranded in your neighborhood.

Our house in Phuket was right on the highway. Ok, not literally ON the highway, there was a little mini street separating the entrance to the house from the mad double trucks, over loaded pickup trucks, motorcycles with way too many people on them without helmets and of course the most dangerous of all, the “salings”; motorcycles with open sidecars loaded with children, most of the time standing up just feeling the breeze.

My husband had a drivers license, but he hadn´t really used it until we got to Phuket. So technically you could say he really learned to drive in Phuket. At the beginning he had trouble finding a good place to turn around if he missed the place he wanted to go. Left handed parallel parking was also tough. What he was mostly amazed at was how the motorbikes were pretty much kings of the road. You had to drive defensively and offensively at the same time. Your mirrors are your best friends, motorbikes can show up on every side of the car, at any speed and with any combination of driver, passengers and load.

Check out this video of one of those crazy trucks! 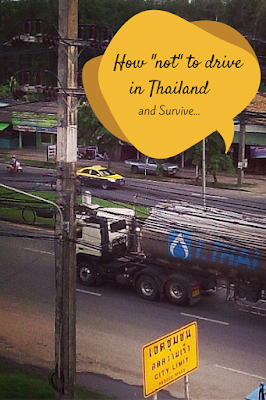 While in the back I was specially terrified of the double trailer trucks with 18 wheels that seems to speed on the road as if the drivers were playing a racing game on playstation. For a while I was determined to drive no matter what, but was discouraged every time I tried to even cross the road in front of our house. In the two years we lived there I managed to cross the road no more than five times. The crazy amount and size of the vehicles that sped on there was just too much for me. Thepkasattri Road, the road that crosses all of Phuket from North to South, is famous for all sorts of vehicular accidents. I never managed to get behind the wheel of our car. Oh well, now we’ve moved on from Thailand that “not driving” isn’t a problem anymore thankfully.

All this might sound like driving in Phuket and Thailand is impossible, but it´s not. This is just my personal opinion as a “non driver” I met plenty of expats and travelers in Phuket who drove cars and motorbikes without a second thought. Although every single one was amazed at the way everyone else drove!

If you are going to Thailand soon and plan to drive, don’t forget to check out The Traveler´s Guide to Driving Etiquette in Thailand before you go! You’ll be glad you did.

This is a sponsored post but all opinions are my own.

“The Traveller’s Guide to Driving Etiquette” is an interactive map for tourists, developed in conjunction with a lot of travel bloggers, where you can click on a country to find out the laws and unwritten laws of driving there.