I have this thing with ginger beer

When I first tasted Ginger Beer

The change of the century didn’t bring along the end of the world but it did bring along something special for me. A few months after the Y2K anti-phenomenon, I traveled to Australia with my daughter.

There are lots of things I liked about Australia but the greatest discovery of all was ginger beer. In brown glass bottles and chilled to perfection, the tang and spice were perfect for the heat and summer humidity. I fell in love at first taste.

For years after that I craved ginger beer off and on, always hoping I would drink it again. Through the internet I found the places in the world where it was available, essentially the United Kingdom and any place colonized by them.  If any friends traveled to those places I would ask for a bottle or two of the delicious concoction. My favorite was Bundaberg from Australia but any brand would do. When I was pregnant with my son, I had some serious ginger beer cravings and a friend filled half her bag with two liter bottles all the way from London. I was so grateful!

Many years later my family and I moved to Thailand and the first thing I looked for in the supermarkets was ginger beer. I knew there were lots of Australians in Thailand so there had to be some ginger beer somewhere. I found a couple of bottles off and on in the Expat Supermarket but you could never be sure if they would have it that week.
In Bali, I found a supermarket that had a hidden shelf under the canned beer where they stocked little bottles of a nice ginger beer, it came in a glass bottle and I bought as many as I could whenever I went there. Once in a while I found Bundaberg in the expat areas and those were the good days.

Nothing prepared me for the ginger beer in Sri Lanka.

I can see a blog post churning about this. I have an uncanny obsession with Ginger Beer! Playing catchup with the #mkbkids Instagram challenge #meetthemkbblogger This post is for “I can’t live without. ?

We arrive in Sri Lanka at 2 am and were very thirsty. There was a little fridge in the lobby of the hotel where I noticed a brown plastic bottle with a label that said EGB. I picked that one because it looked alright, opened it and drank. Lo and behold it was ginger beer! And it was pretty good! That’s when I knew I would like Sri Lanka.

A few days later we ate at a restaurant where they served homemade ginger beer that had sediment and raisins! It was the greatest ginger beer moment of my life. Thankfully the woman who makes this ginger beer also sells it bottled in green glass bottles and it didn’t take too long to find where.

I am thankful for Ginger Beer!

What is ginger beer you ask?

First of all it’s not alcoholic, so you can drink as much as you want. If you have never tried ginger beer, image the taste of ginger ale multiplied by 100. Ginger Beer is made with a ginger culture, fermented to make a base that you can use over and over. Homemade ginger beer is the best but it doesn’t last as long as manufactured ginger beer.

You can make ginger beer at home if you are familiar with growing cultures and yeasts, I have never tried.

Get some ginger beer right now 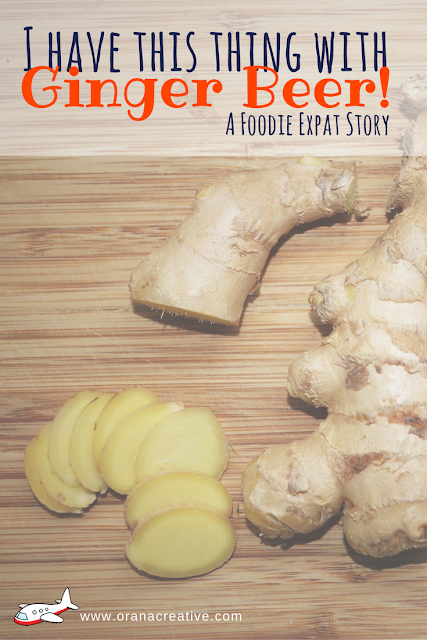