During the years I’ve been blogging I have come across some great Family Travel Blogs, some awesome Worldschooling Blogs, and also some really interesting Multicultural Family Blogs but none have stood out to me like The Kid Trotter. I was hooked before they even launched their website!

One day a nice comment pops up on our Facebook Page accompanied by a really cute illustration of a traveling girl in a pink shirt and it grabbed my attention instantly.

It’s not often that you run across something so inspirational that you need to know more. This is one of those things; For example the opening sequence of the show is so much fun and the art and illustration so uplifting, they did a really great job with that.

I can’t forget to mention that the entire thing is presented bilingually in French and English; the website is in both languages, and the shows are narrated in both languages as well. I would love to see it translated into Spanish later on, it has the potential for many languages!

So what is The Kid Trotter?

The Kid Trotter is a Family Travel Show like you’ve never seen before. Centered upon the experience through the eyes of a child, their adventures are fun, entertaining and a nice refreshing take on traveling family experiences.

Enya is the Kid Trotter, a five year old full of wanderlust that loves discovering new places with her parents on the most original form of transportation you could think of; kick scooters. Enya´s scooter is pink and it’s pretty much a symbol of their project.

Dad Trotter and Mom Trotter are Irish and French respectively and have a deep relationship with travel that has already taken them around the world. If they can get the funding (which I’m sure they will), They plan to do it all over again, this time with The Kid Trotter, their kick scooters, and plenty of film equipment.

When I discovered this awesome family, what they had in terms of social media for The Kid Trotter was a Facebook page, a Twitter Profile and a trailer for what was coming up. The idea was so unique that I couldn’t help myself but reach out, and that is how we kept in touch through the last few months and ultimately Crazy Little Family Adventure got the scoop on the launch of the first three episodes and the Website!

Now go on and check out the trailer for the Kid Trotter TV Show!

So do you love it? Of course you do.
I can’t even think of more things to say because everything about their idea is extremely cool and amazing and you just really have to go over to their site and watch their first three episodes about Vietnam and read all about their project and its origins. And don’t forget to follow them on Social Media to be sure you don’t lose track of their adventures and their super fun show! 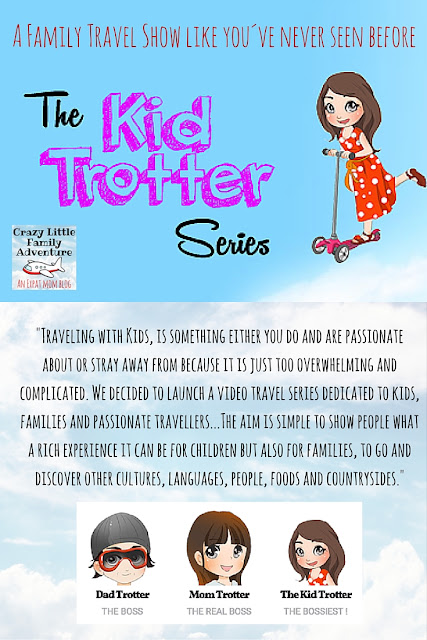